Emergency exercise – Simulated bomb explosion on board an aircraft and fire

Today, 23.11.2022, Timisoara International Airport “Traian Vuia”, organized an emergency exercise for the hypothesis of a complex intervention generated by the occurrence of an act of unlawful intervention. The action is part of the Crisis Management Plan, a document which sets out various situations that impact on the safety and security of flights and passengers.

The scenario prepared by the crisis management team was based on the premise that, after landing an aircraft, the crew is asked to change the taxi route and stop at the isolated parking area, when a bomb threat against the aircraft has been received by telephone at the airport.

During the taxi, the device was triggered and an explosion occurred in the aircraft’s baggage hold.

After the immediate intervention of rescue and fire-fighting teams, the fire was extinguished and the passengers were evacuated immediately and transported to a safe area.

The emergency situation was announced through the National Emergency Call System (112) and the County Emergency Committee decided to activate the Red Plan.

All the institutions authorized to intervene in such situations reacted promptly, and the airport’s own intervention forces were mobilized on the scene, with fire-fighting water and foam extinguishing vehicles, together with teams from the SRI, ISU, SMURD, Gendarmerie, Police, Prosecutor’s Office, who intervened with personnel and means specific to each institution.

Medical crews carried out triage and first aid, and passengers were then categorised according to the severity of their injuries. Passengers requiring hospitalisation were transported by ambulance to the County Emergency Hospital.

The Gendarmerie had the role of securing and protecting the area around the aircraft.

We thank for the firm involvement and exemplary collaboration with all the institutions present and we thank the officials who participated as observers from the Timis County Prefecture, Timis County Council, AACR, Ministry of Transport, Timis IPJ, Timis Transport Police, Timis Border Police, Timis ISU, Timis County Gendarmerie Inspectorate, SMURD.

According to the regulations, such actions are organised every two years in order to test the response capacities of the institutions and the way they interact and cooperate.

The simulation exercise ended without incident and the scheduled air traffic during the same time frame was not disrupted. 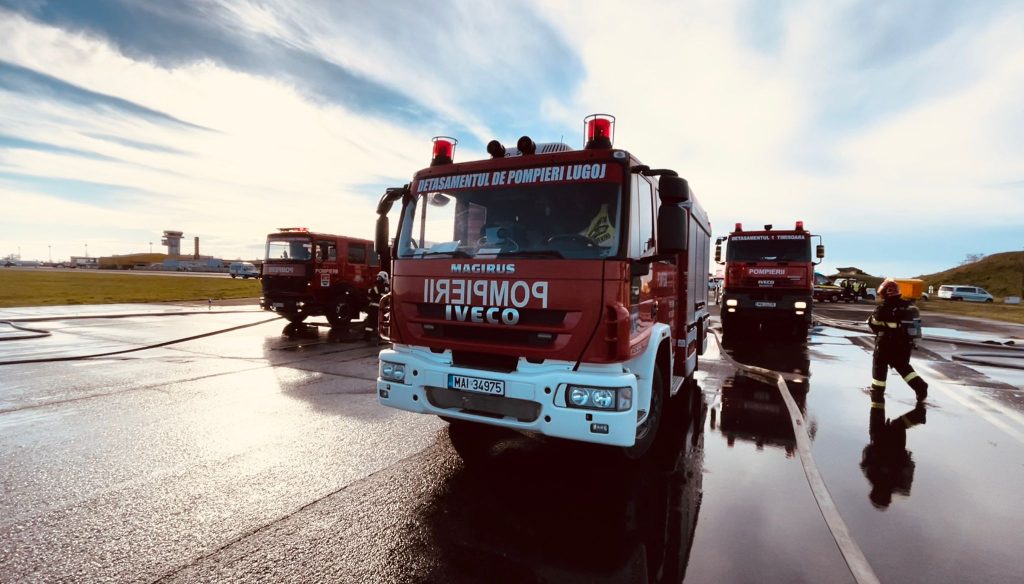